Did you know that over 500 hours of content is uploaded onto YouTube every minute!? According to YouTube's official website, it boasts over 2 billion logged-in users each month. YouTube has literally changed the way we interact with each other. And all this started in 2005 when 3 ex-PayPal employees started a video only platform. The very first video on YouTube was a 15-second clip recorded in a zoo.

Pretty cool right?! In this blog we’ll take you on a journey back in time to the first ever YouTube videos posted by popular channels and creators. Not just that, but if you stick around till the end, we’ll also share video ideas and show you how you can create your own first YouTube video. Let’s dive in!

Before YouTuber and Vlogger became a career option, some people contributed to YouTube to make it the repository of videos that it is today. Let’s go down the memory lane and see some old YouTube firsts - videos and channels that started it all on YouTube. This will also help you with your idea for your very first YouTube videos!

1. YouTube’s First Ever Video - A Walk At The Zoo

This is the first ever video uploaded on YouTube. We see Jawed Karim, one founder of YouTube at the zoo. He talks about Elephants. This short 15 second clip uploaded on 24, April 2005 has 168,808,995 views. Arguably, Jawed Karim would be the very first YouTuber!

Meanwhile, if you want to make your own news roundup videos for YouTube, use this Weekly Newsletter video template from InVideo and customise it to suit your own YouTube channel.

Dave Colditz made YouTube his platform of choice as an indie musician He gained popularity for his pop punk covers and parodies of various songs. He also released his own music videos and albums on YouTube. His channel, Dave Days, (1.51 Million subscribers) became such a sensation on YouTube that he got Miley Cyrus to appear in a cameo in the video for his track “The Lost Song,”

He has continued with his music career, using various social media platforms. Colditz also hosts a free online class, called Musician.Life, where he teaches artists how to become successful in the music industry.

Now you can create your own music videos on YouTube to follow in Dave’s footsteps super easily using InVideo. Check out this music artist launch video template you can use to start off your YouTube journey.

The 3rd video ever to be uploaded on YouTube - this seems to be a test channel started by the founders of YouTube itself. Uploaded on April 24, 2005, this video resembles a meme or a TikTok video. We see a man jumping between two walls and screaming, before being congratulated by the cameraman at the end. The 5 second clip seems to have no purpose, quite similar to the memes we see today!

Probably the first ever cat video on YouTube, this was the 8th video on YouTube. Uploaded on 22nd May 2005 by Steve, this 30-second clip has over 120,000 views. Showing a pet owner teasing their cat with a string toy in a dimly lit room, this video has become the trendsetter of a generation! 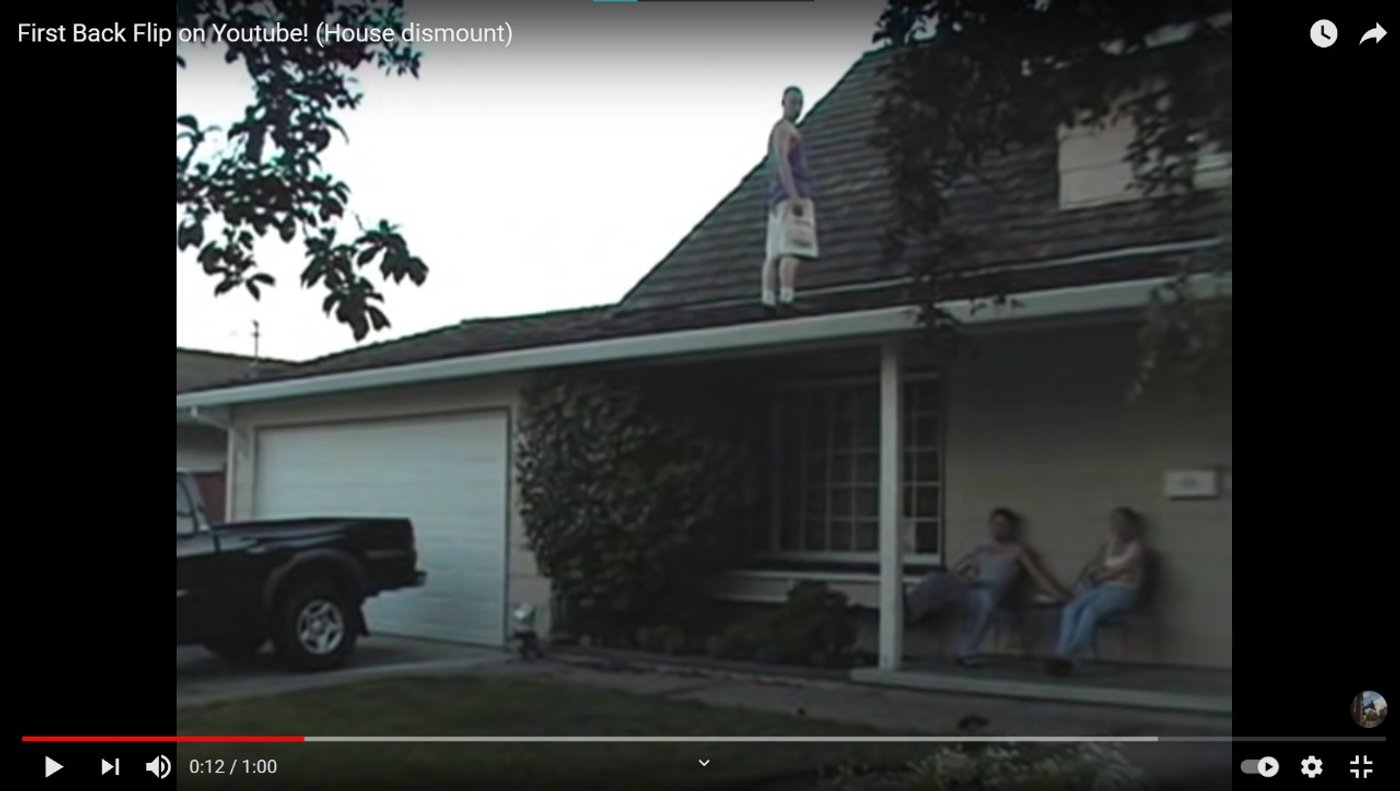 Tim Leister of COBALTGRUV, YouTuber since 2005, uploaded the very first backflip video on YouTube to share with family and friends. The rest, as it says in the description of this video on YouTube, is history.

Meanwhile, note that this video has text graphics, psychedelic music and even slow-mo with an almost GIF like quality. Pretty ahead of his time, wouldn’t you say, considering this video was uploaded in 2005! This YouTuber is still active today, and their editing skills have also come a long way!

Cybergoon Squad is the 6th video, and the first animated video to be uploaded to YouTube. It’s probably also the first weird video clip found on YouTube. This 5 second animation shows three cyborg-esque characters marching through a metallic tunnel. You feel that you’re watching an amateur video editor’s attempt to create a sci-fi video. Who knows where they are going, or why, but the clip has almost 160,000 views. Greg’s YouTube channel has a bunch of other old strange animated videos, including an ultrasound video.

Speaking of animated videos, you can now create your own motion graphic videos with cool effects and music online for free using InVideo.

The 4th video to be uploaded to YouTube, on April 28, 2005, this shows a long-haired man shaving a bald patch into his blonde hair on a busy beach walk in Waikiki Beach, Hawaii. This video has been cut and edited, and comes with a description explaining that Paul wanted to know what he would look like at 50.

Paul Bragiel, the YouTuber featured in this video, eventually used his channel as a personal vlog noting his preparation and journey to the 2014 Winter Olympics in Sochi.

Ray William Johnson is a YouTuber who became very popular once he launched his YouTube channel in 2009 and started a series called “Equals Three.” Ray probably started the “reaction video” genre that is a whole industry today. Check out his reaction to Harry Potter prank videos in his show uploaded in 2013 in the video below.

Known for his comedy sketches and parodies, Ryan Higa filmed alongside three friends with an especially inferior quality camera. Higa’s YouTube videos were a satirical take on commercial how-to and other video formats. He held the title as the most subscribed-to channel for 677 consecutive days between 2009 and 2011, a feat that only PewDiePie has topped.

This long video, uploaded on September 12, 2015, is considered YouTube’s first ASMR video. You see the YouTuber (Ephemeral Rift) talk to the camera past midnight, while he (seemingly) taps his camera, making a tap-tap sound. Both his voice and the sound are probably vintage ASMR

ASMR or Autonomous Sensory Meridian Response videos are a big deal on YouTube today. These videos help provide a relaxing, calming and soothing experience for the viewer while helping to relieve their anxiety, stress, insomnia, to help those suffering with PTSD or depression, to serve as a study aid and more.

Who doesn’t like a good prank? A genre that spawned a bunch of television shows, prank videos came to YouTube in 2006. One of the first YouTube pranksters would be Greg Benson of MediocreFilms. In this video, we see him interviewing a bunch of people and hitting them with his microphone while asking them questions. Greg probably formally started the YouTube pranks genre. Check out this video on the history of YouTube pranks if you’re tickled by the genre!

The first comment to this YouTube video uploaded on 26th June 2010 states “First video that doesn't include elephants, snow, fire, dancing or beds.” This video simply shows 2 guys in a motor boat on the water. You can hear the wind whipping around their heads and see their hair flying. This might arguably be the first travel vlog clip on YouTube!

Cooking videos, recipe videos and how-to videos about food and drink are a popular YouTube genre today. Perhaps it all started with this video of a flambe attempt gone wrong! You simply see some guys trying to make a flambeed dish and instead setting fire to the pan!

Smosh is one of the oldest YouTube channels and the first to receive a Diamond button from YouTube (for reaching 10 million subscribers). Their Pokemon theme song parody video on YouTube went viral and made them YouTube sensations. Smosh (Anthony Padilla and Ian Hecox) started their YouTube career with a Mortal Kombat theme song parody video. We see Ian and Anthony doing strange moves to the Mortal Kombat theme in the video. Check it out here.

Michhelle Phan was probably one of the first beauty bloggers on YouTube. Check out this video she uploaded on May 21, 2007. She takes us through the steps of a natural makeup look.

The beauty genre has since taken off on YouTube with more and more creators making different makeup videos, looks and reviewing different products. Want to create your own makeup tutorial video? Check out this free template from InVideo that you can edit and customise to your brand.

So these were some popular, vintage YouTube videos that helped pave the way for our YouTube present and future.

No need to make a grand plan about your first YouTube video. It can be as simple as sitting in front of the camera and talking about your business, your work or even yourself! For example, check out this vlogger introducing herself on YouTube.

A great way to start your YouTube journey is by sharing your own story or journey and how you’ve overcome different battles. This can also be a great way to connect with like minded people! For example, check out this YouTuber’s weight loss journey.

3. Give A Room, House Or Workspace Tour As Your First YouTube Video

Give your YouTube audience a view into your home, workspace, studio, shop and more. You can talk about organisation, decor, remodelling and lots more in such videos. Check out this first video by YouTube Christina Villegas as an example.

4. Review Your Favourite Products As Your First YouTube Video

You probably know how important reviews are today. Your first YouTube video can be a video review of your favourite products or services. For example, check out this phone review by Marquess Browne.

You can use InVideo’s review video templates to create your own review videos online for free.

5. Create A Channel Trailer As Your First YouTube Video

So these were some old YouTube first videos and trends that we take inspiration from. Feeling inspired yourself? InVideo has all the tools you need to start your own YouTube channel. You’ll have access to a super intuitive video editor, tons of free templates and stock footage to create your first video.

If you’ve found value in this article, don’t forget to share it with your friends! For more quick tips and hacks on editing and creating videos, subscribe to InVideo’s YouTube Channel. Finally, if you’re looking to create thumb-stopping videos in minutes (even if you’re not a PRO)- sign-up for a free account on InVideo.io today.