Beginner's Guide To Frame Rates For Every Type of Video

Think back to when you watched a really cool slow-motion clip in a cinematic video or the sped-up transition that led you from one scene to the next. It looks and feels amazing right? If you’re new to video editing and wondering how you can achieve such results, then understanding frame rates is the first step to getting there.

Frame rate or frames per second (fps) plays a crucial role in determining the quality of your video as well as improving the viewing experience for the audience. But with so many different types of frame rates – 24fps, 30 fps, 60 fps, 120 fps – it can get daunting to figure out which one to use and when to use them.

That is why in this article, we will walk you through everything you need to know about frame rates so that you can create compelling videos with ease.

Without spending hours on your laptop 1. What is the frame rate, and why is it important?
2. What happens when you shoot & edit at different frame rates?
3. How can you choose the best frame rate for your video?

1. What is the frame rate, and why is it important?

When you’re watching a video or movie, you’re not really looking at a video per se. This video is only a collection of still images moving fast enough to create the perception of motion—typically loading 24 consecutive images in a second.

An obvious derivation of this is that frame rate determines the quality and style of any video—the higher the frame rate, the faster frames will load making the viewing experience smoother. But how does that work exactly?

This is because our eyes can take in the visual information around us at a specific pace. When you’re watching a video and the rate at which the frames are playing is slower than the pace at which your eyes take in the information it will appear choppy and if it’s faster, you won’t be able to register all of the information.

The standard rate at which videos are shot and played is often 24fps, which is believed to offer a smooth viewing experience since the brain cannot distinguish between the still images in each frame. But when you shoot/play the video at a lower frame rate, say 8fps, you’ll see the video lags so much that you can see individual frames—and that doesn’t offer a great viewing experience.

Now, when you go slightly above 8fps, but still below the standard 24 frames per second, say at 16fps—you’ll still see a significant lag, and a video that’s still edgy around the corners, because it’s lower than the frame rate that seems “normal” to the naked eye.

Finally, when you shoot he video at the standard 24fps—the most common frame rate for videography and filming—you’ll find that video appears smooth and normal because it is close to how we perceive motion with our own eyes.

What makes 24fps the standard in most videos?

24fps is the most commonly used frame rate for videography. Ever since the 1970s, the industry standard was set to 24fps because it was fast enough to create a seamless audio-visual experience without wasting any film in the video. It enables excellent sound reproduction without causing any flickers in the video quality.

What happens when you shoot at 60fps and higher?

Thus shooting a video at 60fps or higher would mean the output is as crisp and detailed as it gets. However, these details will not really make a difference for the naked eye if you plan to play back the video at the standard rate. But when you slow down your footage or speed it up, you will instantly know the difference.

2. What happens when you shoot & edit videos at different frame rates?

The two key factors that determine the viewing experience are—the fps at which it’s shot and the fps at which it’s played. Considering these factors, when a video is shot, edited, rendered, and played at 24fps – it will provide a seamless viewing experience. But if you shoot a video at 30fps and edit or play it back at 24fps, you’re actually reducing its smoothness by removing 5 frames per second. The output will naturally look more choppy.

Of course, the problem of creating slow motion footage gets taken care of with higher frame rates such as 60fps or 120fps – but these also considerably increase your video’s file size and load on the system. So unless you specifically want to showcase slow-motion shots or create a super-cinematic look, your best bet is to shoot and edit the video at the same fps. This is to ensure that you provide an almost natural and super high-quality viewing experience.

3. How can you choose the best frame rate for your video?

Choosing the frame rate for your video depends on a number of factors – what kind of video you’re making, what is the playback speed for the output video, what mood and emotion do you want to portray, and what kind of effects do you want to include among other things.

But before we deal with the question of how to choose the perfect frame rate for your videos, let’s first see how different frame rates are used in filmmaking: 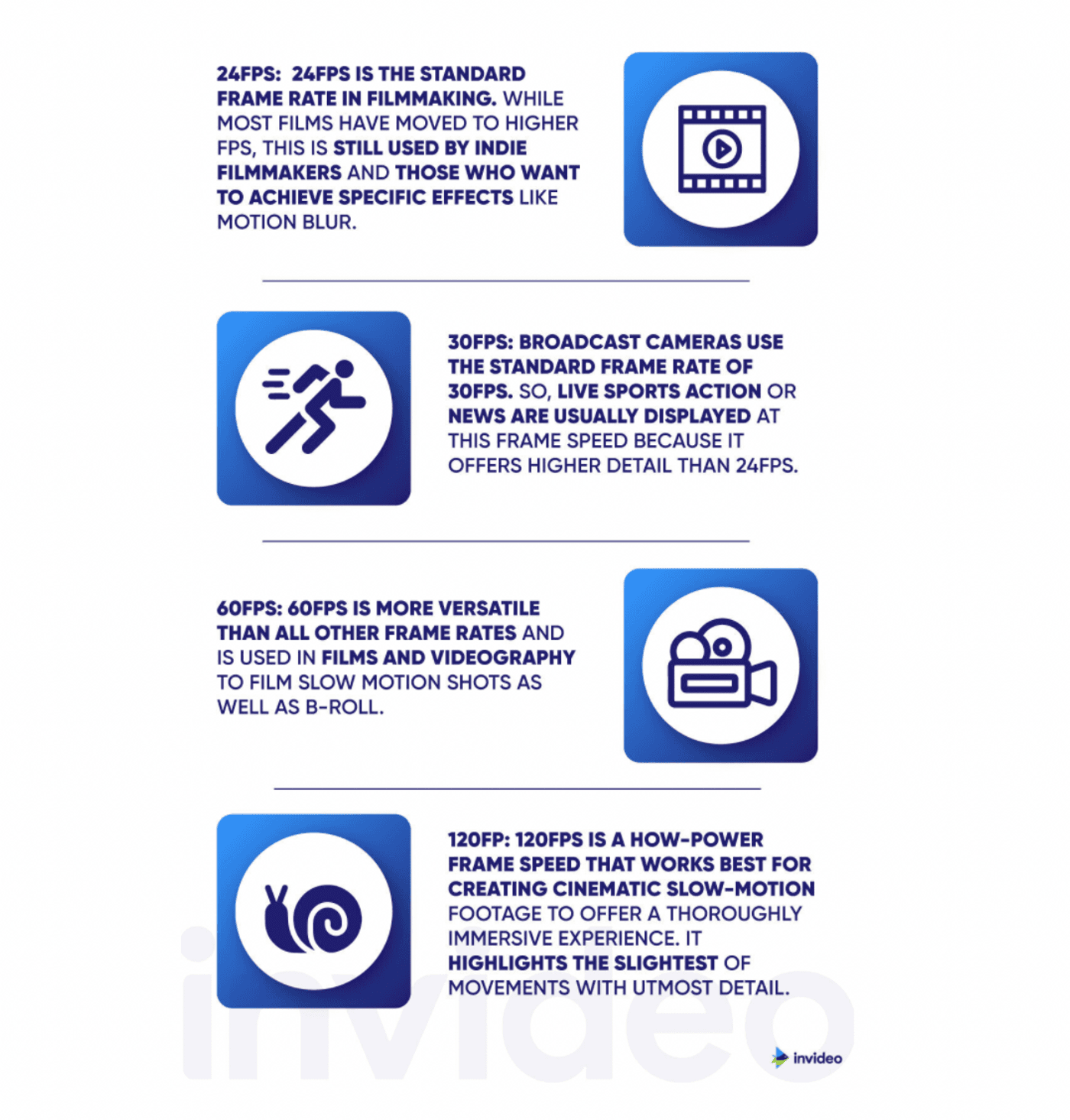 Nowadays, most films are shot in 120p or 4k to ensure that maximum detail per frame is captured. This gives the editors a lot more control over the editing process as well as creative liberty to emphasize or de-emphasize plot points during the story. However, if you’re a YouTuber or an internet-video creator who edits on a laptop, shooting in higher frame rates might not be your best bet.

For instance, the fight scene shown below needs a high level of detail in a slow motion shot emphasizing a punch that the lead character is making and hence it makes sense for it to be shot in a higher fps. But if you’re making a talking head video, shooting in 30fps will be more than enough for you to get the job done.

Thus, your choice of frame rate depends on the following factors:

What kind of video are you making and who is it for? If you’re making a talking head video then 24 or 30fps would be ideal but if you’re shooting a travel vlog, you will have to shoot at higher fps.

2. Movement in your video

The amount of movement in your video is also crucial for deciding the best frame rate. The higher the amount of motion, the higher your frame speed. Shooting in a quiet, steady setting is easy with 24fps. But if you’re capturing a travel video or shooting an action sequence for a movie, 24fps wouldn’t cut it. You’ll need a higher fps like 60 or 120.

The delivery medium for your footage also affects the choice of frame speed. If you’re making a video for television, the standard is usually 30fps. But if you’re shooting for the silver screen, you would probably prefer 60fps or higher.

Lastly, the file size for your footage plays an equally important role in your choice of frame speed. Shooting a video at a higher frame speed would mean more frames and more information—making the file bulkier. If you’re making videos for your YouTube channel that are edited on a laptop, you’ll want to work with a smaller fps.

When it comes to frame rates, you need to think of various factors before you zero in on a speed that is right for you. With this article, you should be one step closer to making that decision. And while frame rates do determine the quality of your videos to a large extent, that’s not the only thing. How you edit your video is equally important.

Editing videos is super easy with an intuitive editor like InVideo that allows you to add text, music, stickers and cool effects with just a few clicks. If you want to learn how to make cool edits to your video in minutes, check out this blog.

And if you prefer to learn through videos, check out our best practices and expert tips on producing thumb-stopping video content on our YouTube channel.

Both these frame rates offer individual benefits. 30fps is well-suited for live broadcasts of news and sports action. It’s also great to add more detail to fast-moving videos. 60fps, on the other hand, is ideal for shooting slow-mo content. It produces a smooth effect for high-quality footage.

120 frames per second is the best PS5 frame rate to create an immersive gaming experience. You will need a television or device that supports 120fps along with 4K resolution for playing games on PS5.

3. How to increase frame rate on a PC?

You can increase the frame rate on your PC in multiple ways. Here are some quick and easy options:

- Disable start-up items and end tasks unnecessarily occupying space.
- Get the latest graphics driver through updates or re-installation.
- Minimize the screen resolution.
- Clean your disk and change performance settings.
- Assess your disk to identify any errors.

4. How to change the frame rate in Premiere Pro?

Adjusting the frame rate in Premiere Pro is easy. The video editing software interprets every footage at 29.97fps by default. Follow these steps to change it to your preferred fps:

1. Go to the Project pane and right-click the video clip.
2. Hit the Modify button and go to the option for Interpret Footage.
3. Click on Assume this frame rate and enter your desired frame rate.