4 Rules to Create Cinematic Composition in Your Shots | Filmmaking 101

Understanding how to compose your shots is essential to filmmaking because shot composition can make or break your narrative. If you’re new to composing your shots or scenes, it can get daunting because you can do it in several different ways. Since this is a creative process, there is really no wrong way of doing it. But thankfully, there are some tips and rules that can help you get started with composition in film and reach a point where you’re ready to have more creative control. And these are exactly what we’ll help you understand in this article.

Pro tip: Once you’ve shot well-composed shots, you can polish and turn it into a cinematic masterpiece using InVideo’s online video editor.

Here’s everything we will cover in this article:

1. What is Shot Composition?
2. Rules of Cinematic Composition
3. What are the elements of composition?

1. What is shot composition?

Shot composition refers to how a scene and elements of a scene - props, actors, etc. - are arranged within the frame. Composition shapes the viewer’s experience of the video or film. It has a direct effect on how they feel when they look at what is going on in a scene. The better your grasp of composition is, the more compelling you can make the viewing experience for the end user because you can then direct the audience’s attention towards what you want.

Like we mentioned earlier, in creative processes such as these, you don’t have strict rules or rights and wrongs. These are guidelines to help you kickstart your composing journey and help you reach a point where you feel more confident to experiment with creating your own unique shot compositions.

A) Rule of Thirds

Rule of Thirds is one of the most popularly used cinematic composition techniques in photography and film. It is called a ‘rule’ because it is derived from what our eyes naturally find appealing.

According to the rule of thirds, if a frame is divided by an imaginary 3x3 grid, our eyes tend to naturally gravitate towards subjects placed either on the intersecting lines or at the intersection points of these lines. This off-centre position creates an intuitive sense of balance.

In film this technique is used deliberately to showcase a subject as a point of interest or to give more context into what the character is seeing, thinking, or feeling. As an example, consider this shot from Skyfall. The framing and composition automatically draw your attention towards Daniel Craig while offering a view into what he sees. 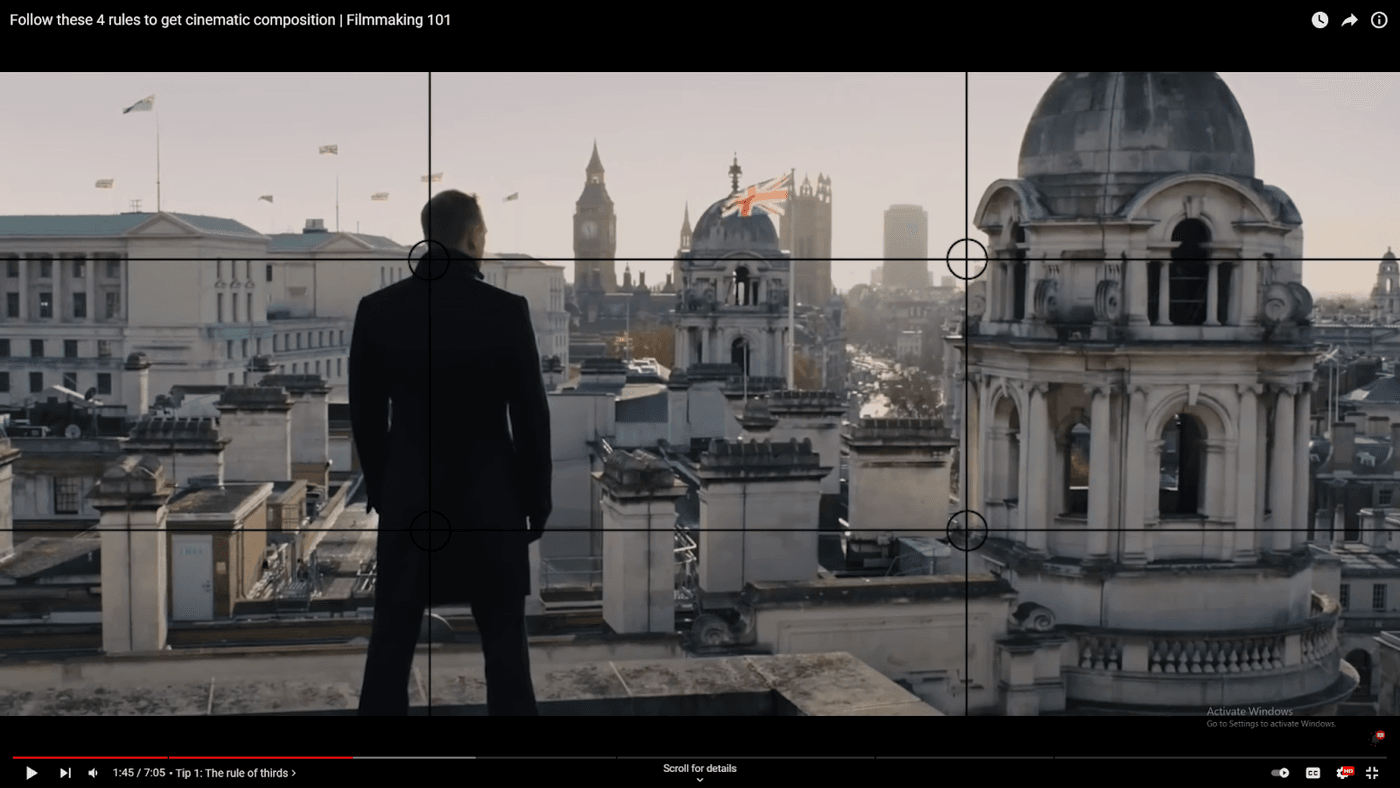 Another popularly used cinematic composition technique, leading lines make use of visible lines in the shot to guide the viewer’s attention towards or away from the focal point. It also creates an illusion of depth to the footage.

For such a shot composition, start by identifying the visible lines leading towards the focus. Then, position the subject there. It may take some time and practice to master the art of scoping out leading lines in your location. Fortunately, they are available everywhere - from stair railings to railway tracks to picket fences to roads and beyond!

To illustrate an example of this legendary shot of Heath Ledger as Joker. The cinematographer has made a smart choice of using architectural lines mixed with some angling to make the Joker the center of our attention. 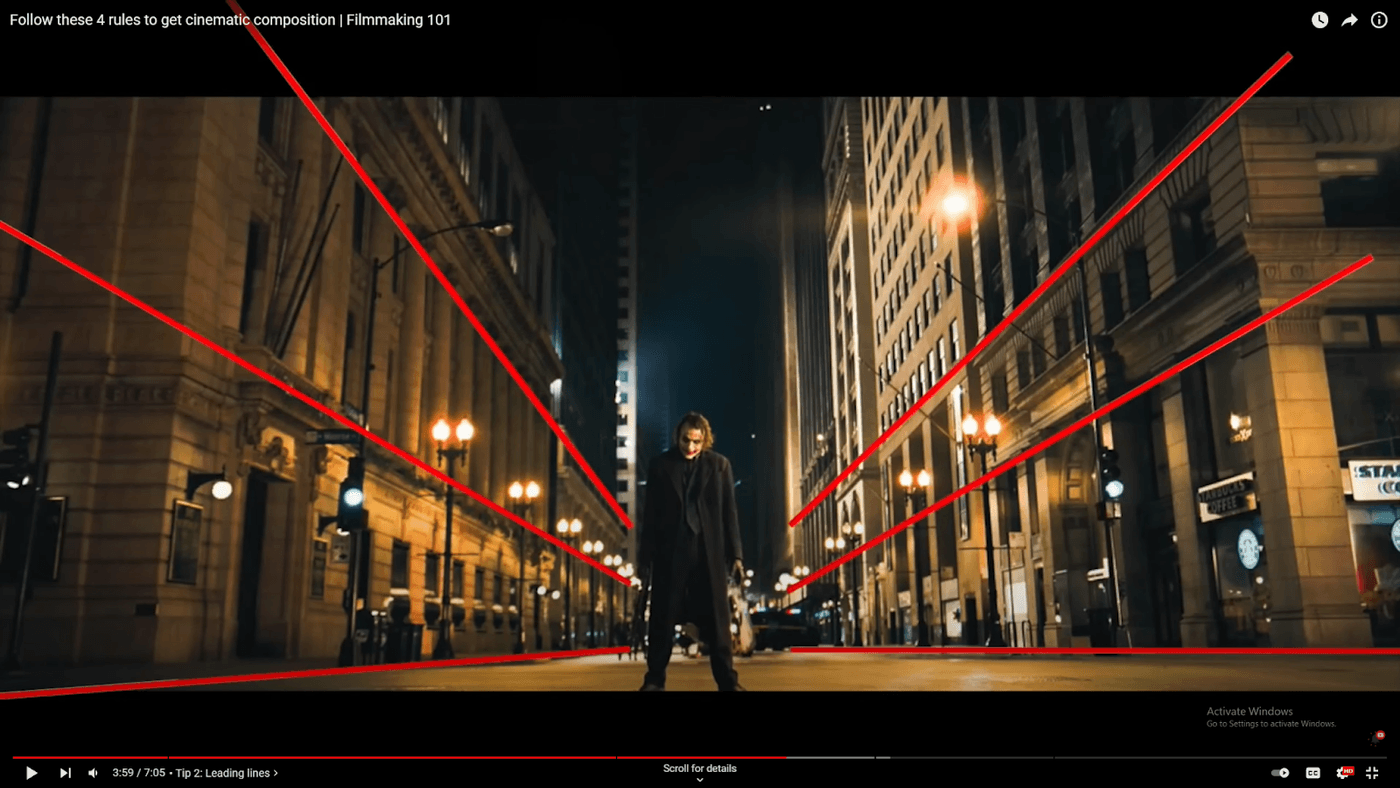 In most scenarios, you’ll find that when leading lines are used, the subject is also placed in the centre of the frame. But sometimes. cinematographers also use diagonal or horizontal lines to create a sense of movement without focusing on any particular subject. A classic example of such a technique is this shot from Hitchcock’s The Birds: 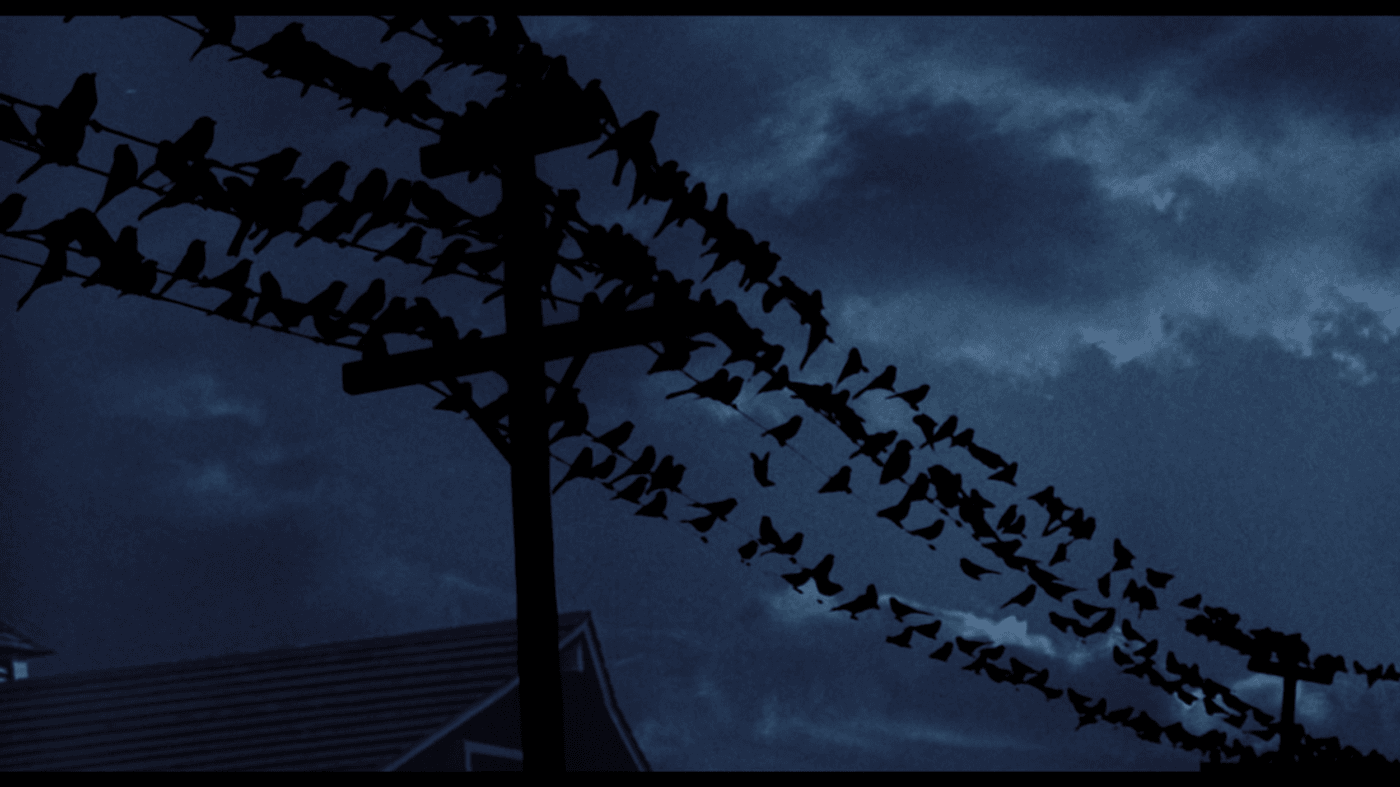 If this scene was shot across horizontal power lines, it would have conveyed a sense of serenity. But the use of diagonal lines skews the scene and imparts a more ominous look (Plus, the dramatic look of the sky does not help either).

The next rule of cinematic composition we want to talk about is balance and symmetry – something that the human mind inadvertently seeks out. After all, symmetry and balance are a visual indicator of order and makes everything look good.

If you are able to achieve this in film, it effortlessly imparts a cinematic touch to your composition. Technically, shooting symmetrical frames breaks the rule of thirds and often aligns with leading lines. However, the purpose of using shots that are completely symmetrical is to either emphasize the beauty of the scene, place a powerful moment into the spotlight, or draw attention to the subject.

To create a symmetric cinematic composition, place the subject at the center of the frame while either side of the frame (if divided by a line in the centre) looks identical to each other. Just remember that while symmetrical composition in film is highly impactful, you will need to use it sparingly for those special, poignant moments as overdoing it may dilute the overall message.

This shot from The Shining is the perfect example of such shot composition: 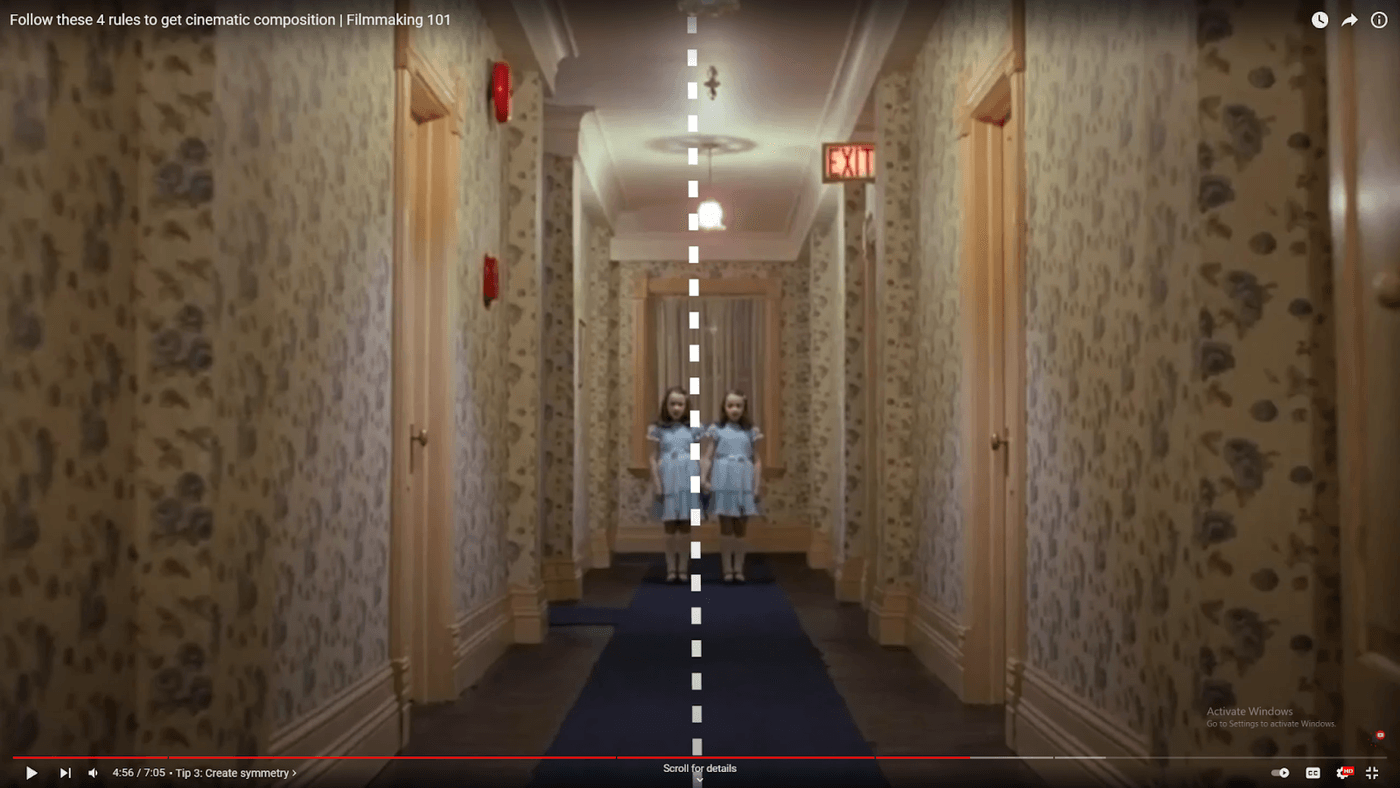 The twins, the walls, the doors, and even dissimilar elements on the wall create a sense of symmetry that makes the shot jump out from the rolling movements preceding it. (Brownie points to you if you have managed to identify the subtle use of leading lines to draw greater focus on the subject).

A deep focus is when both the background and the subject are shown with equal detailing. This helps show context in your video and the relationship of your subject with the surroundings. Take a look at this scene from Django Unchained, which is th perfect example of deep focus: 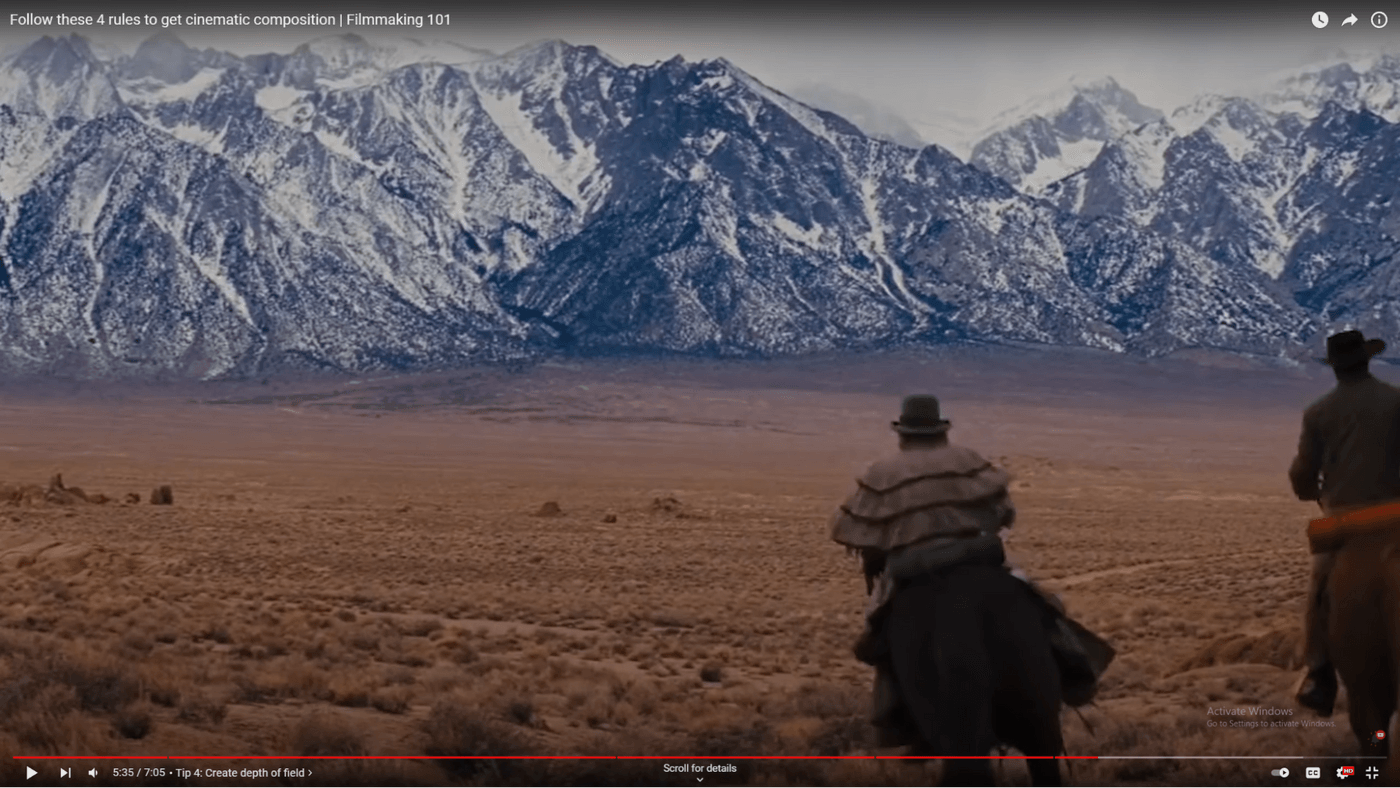 Deep focus is a technique often used for opening scenes by filmmakers and even vloggers who want to establish their location up front.

On the other hand, a narrow or shallow depth of field will only show a part of your frame in focus while blurring out the rest. Usually this is your subject. Using a shallow depth of field helps isolate your subject from the background, giving your frame a more cinematic look. This is also great for when you’re filming talking head videos where you need the focus to be on the subject. Take a look at this shot from The Master, which blurs out the background to put Joaquin Phoenix into focus: 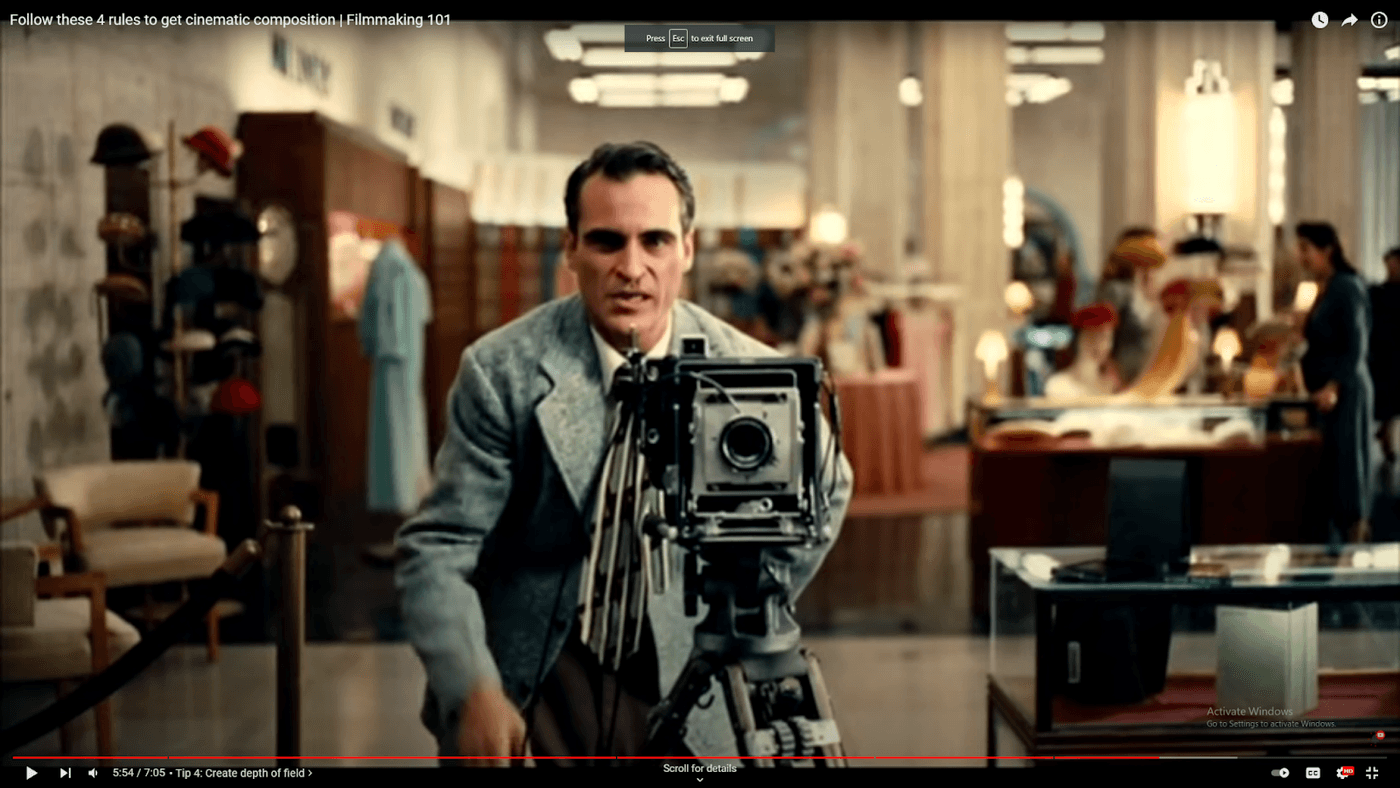 Now unlike the above three rules, depth of field is used in tandem with them not instead of them. However, determining whether you need shallow or deep depth of field depends upon a number of factors, most importantly, the message you convey with that particular shot.

3. What are the elements of composition?

While discussing the rules above, you must have noticed that there were several things like the space around the subject, the colors in the frame, the scale of the subject in relation to the background, as well as camera angles that made up the frame. Well, these are the elements that make up a composition and a better understanding of these will help you have more control over what your composition looks like. 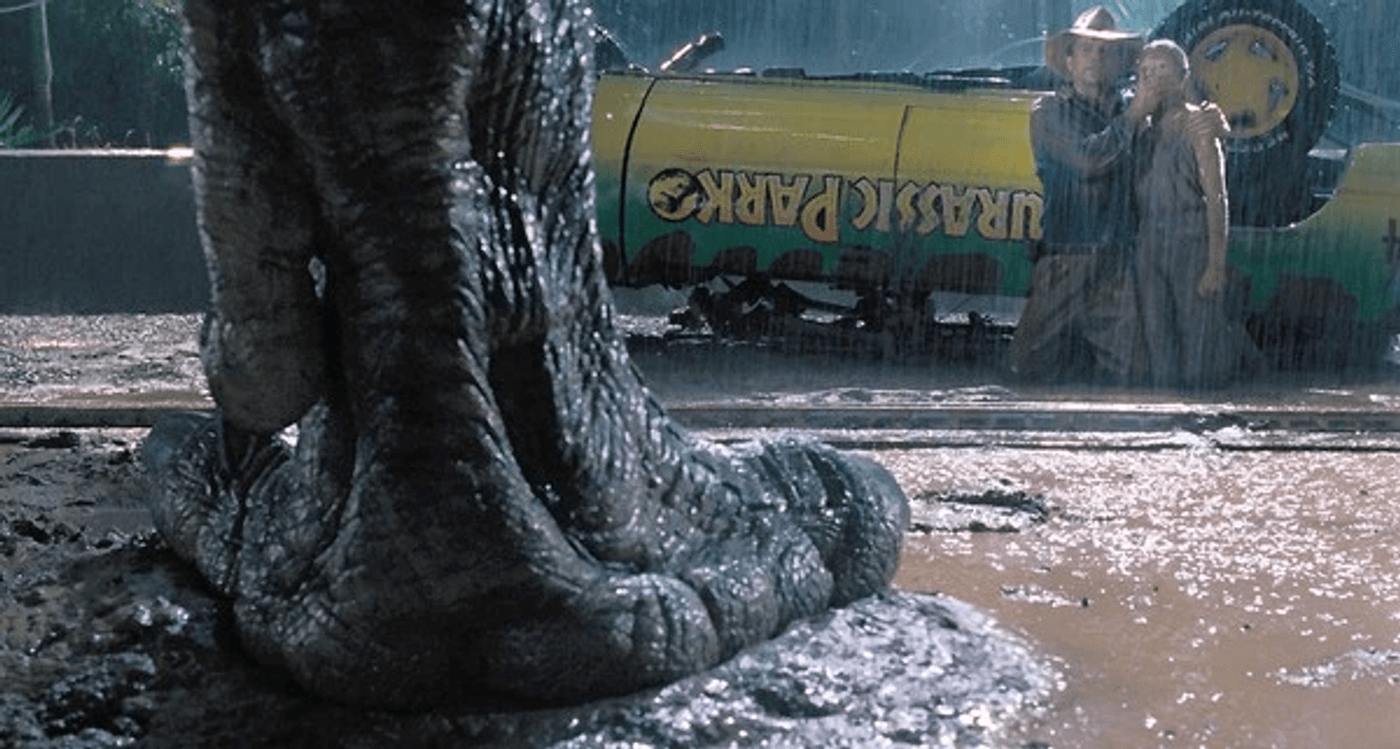 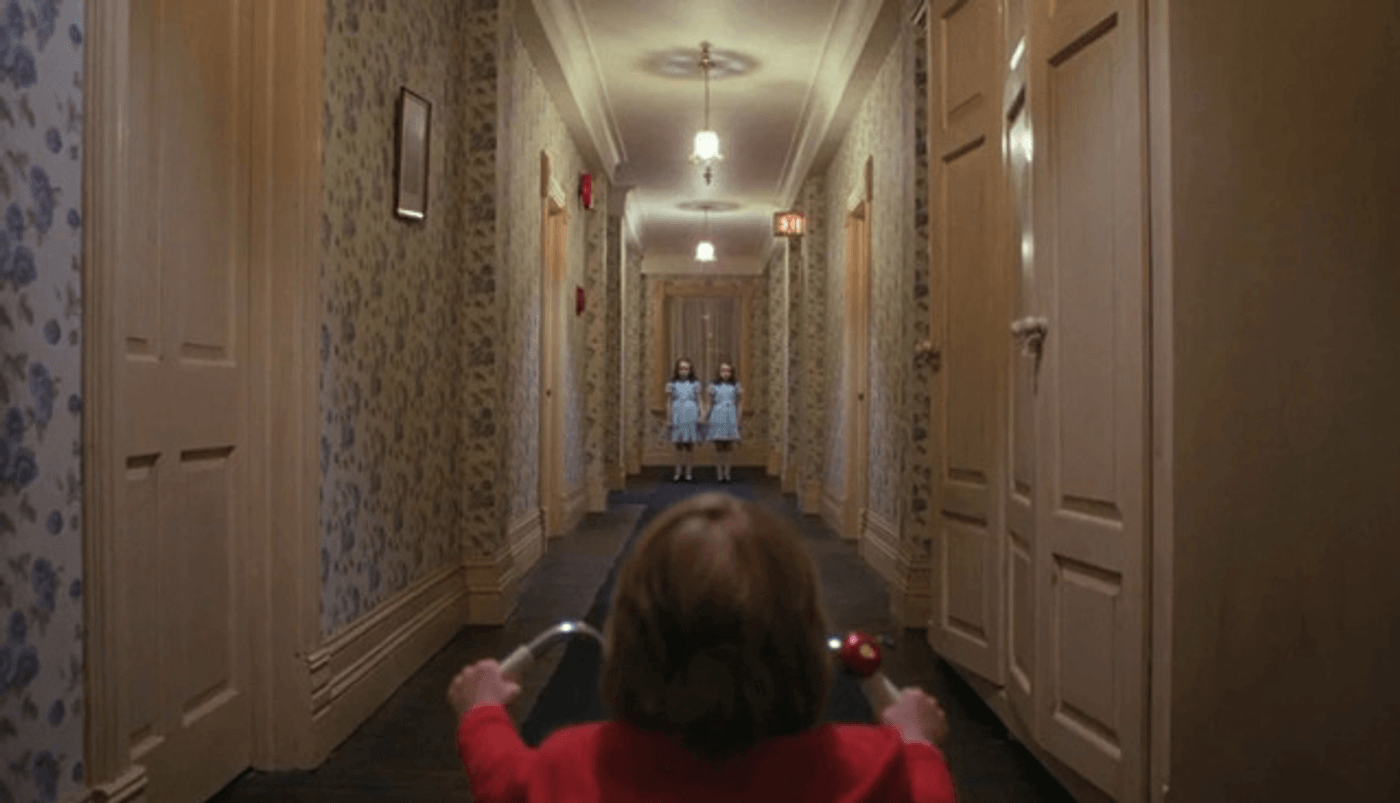 The background and foreground in a film are used to establish the subject’s relation to the settings and the story. That is why filmmakers spend so much on sets and setting the scene.  For instance, if you’re filming a doctor’s biopic, you cannot have a children’s park in the background because it wouldn’t make any sense to the story. 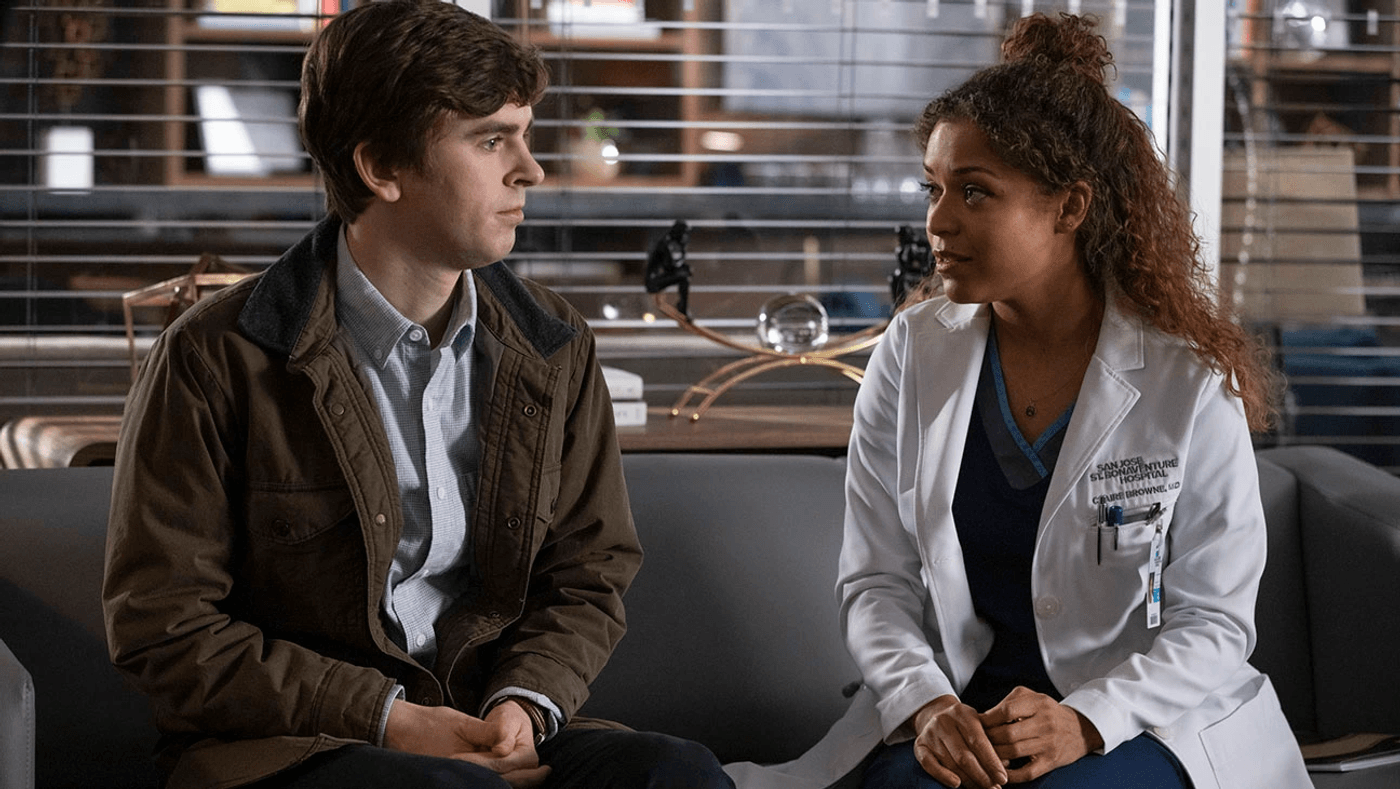 Color is an incredibly powerful medium for conveying emotion and attracting the viewer’s attention. The human mind is trained to associate different colours with different feelings. For instance, warm colors evoke feelings of happiness and joy, while cooler shades make you feel dull and sad. Therefore it’s important to understand the key emotion you want your scene to convey and use colors accordingly. 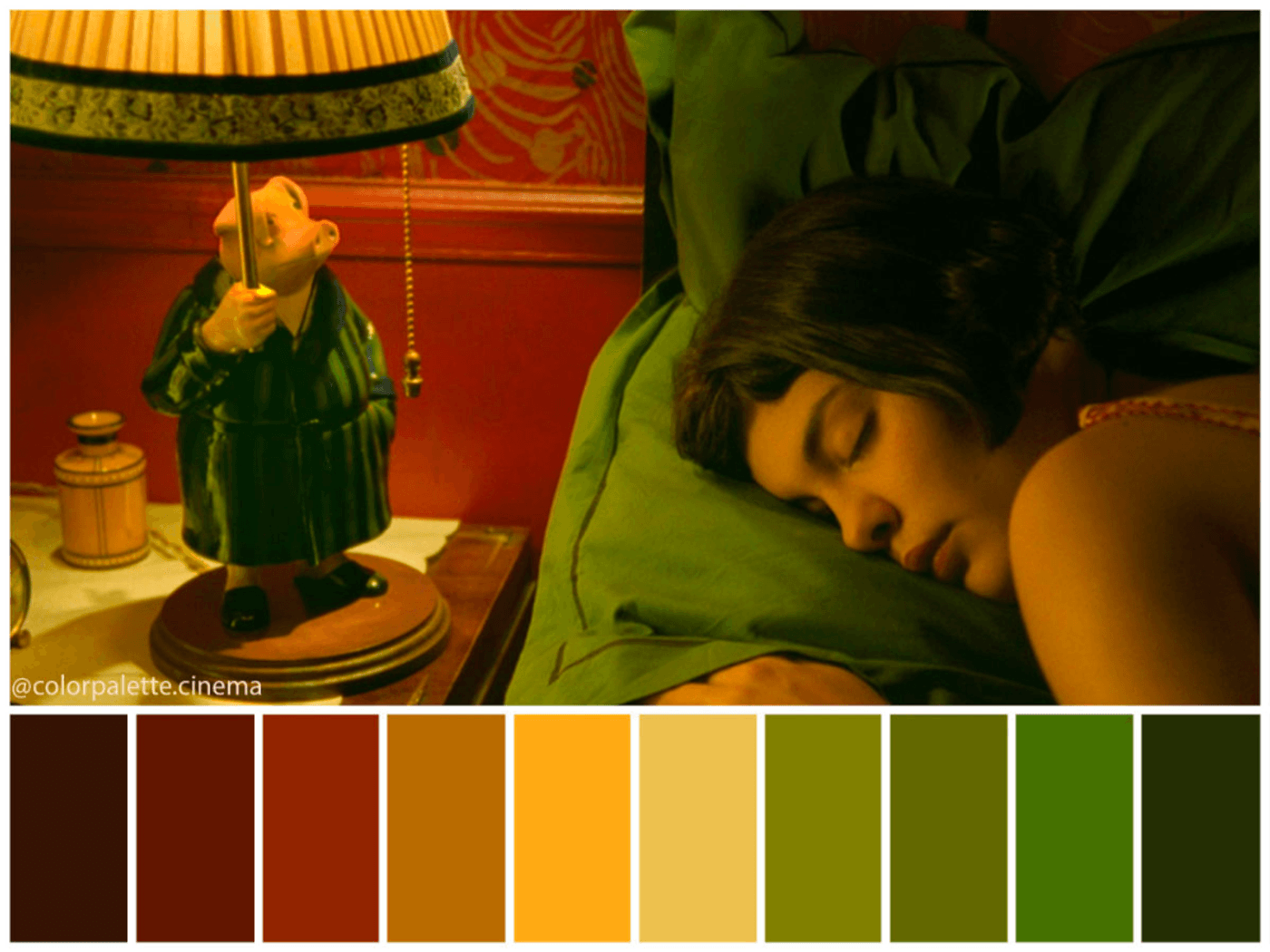 The play of light and shade is impactful as color when it comes to guiding the audience’s attention. As seen above, contrast captures attention - place your subject at the brightest spot in the frame, and they will be at the center of the viewer’s attention. In contrast, place them in the shadows or silhouette them to create a sense of separation in your cinematic composition.

Now that you have a better understanding of the different elements in shot composition, you are ready to go ahead and film your videos.

Once you’re done filming, upload your footage to InVideo to create seamless edits even if you don’t have prior video editing experience.

Shot composition is the first step to creating highly engaging films and this article should help you get started in the right direction. A key component of shot composition is lighting. To know how to create a better lighting setup for your videos, check out this article. Once you have your footage in place, upload it to InVideo’s online editor to create stunning videos with cool effects, graphics and music in minutes!

And if you prefer learning via videos, definitely check out our YouTube channel where we share daily tips and tricks on making videos and helping you become a pro creator.